I am sure that many of you reading this blog are aware that Finasteride is a very commonly prescribed medication for treating “Male Pattern Baldness”, also referred to as “androgenic alopecia” in men.
During my tenure as a hospital pharmacist, working with dermatologists from several countries (US, UK, South Africa, Australia & Lebanon), I’ve had the opportunity to dispense and counsel my patients on the use, dose, and side effects of Finasteride. Besides all the common queries, one common question asked by many of my patients (consumers) is “Can I take Finasteride along with other hair loss treatment?”
The answer is “YES” you can take Finasteride along with “certain” other hair loss treatments which are in fact recommended by many dermatologists. In this blog, I would like to share my experience on two such combinations that have worked wonders for my patients that is worth sharing with you.

Finasteride (1mg tablet) + Minoxidil (5% solution)
Finasteride (1mg tablet) + Aminexil (1.5% solution)
Before we get into the details let’s talk a little about male pattern baldness. There is a myth that “bald men” are romantic and sexier in comparison to their peers. Most men without hair tend to agree that being bald is sexy. Yes indeed being bald is closely related to the fact that these men produce or secrete an excess of the hormone “Dihydrotestosterone (DHT)”. The only concern here is that they have an abnormal or excess activity of the hormone in the wrong areas.
To put things in a simple perspective, “Testosterone is a primary prostatic (prostate) androgen (hormone) responsible for cell growth and proliferation. Testosterone in the body is converted to a more active form called “Dihydrotestosterone (DHT)” by the action a specific enzyme known as “5 alpha-reductase”. 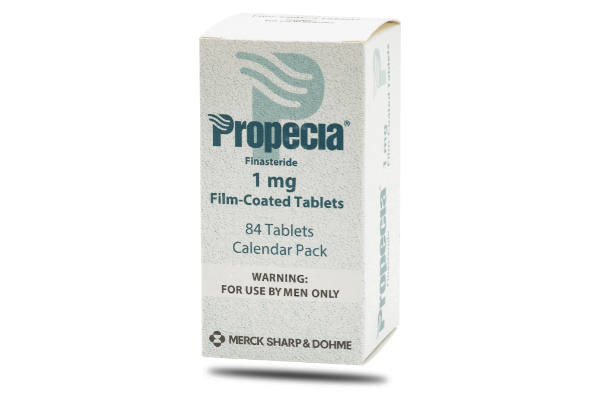 Dihydrotestosterone (DHT) is localized (found) in the prostate, liver and skin (also read as hair follicles). Research has indicated that an overproduction of “DHT” in the prostate is a major cause for the development of “Benign Prostatic Hypertrophy” which refers to the enlargement of the prostate gland thereby causing severe lower urinary tract symptoms. It should be noted here that Finasteride is an inhibitor of the enzyme “5 alpha-reductase, which suppresses the conversion of Testosterone to the more active “Dihydrotestosterone (DHT)” and hence decreases prostatic size or volume. Finasteride in “Benign Prostatic Hypertrophy” is given in doses of 5mg once daily.
Similar research has also indicated that an excess or overproduction and secretion of “Dihydrotestosterone (DHT) in the “hair follicles” is a key cause of male pattern baldness. Hair follicles are sensitive to this hormone and it can cause hair follicles to shrink, causing hair to fall out and grow more slowly. Eventually, hair follicles become so small that hair cannot grow from them. Now, Finasteride a synthetic “anti-androgen” inhibits the enzyme, 5-alpha reductase, from converting testosterone into DHT and in doing so, hair loss generally ceases and hair growth is promoted on balding areas of the scalp. Thus Finasteride is indicated for the treatment of male pattern baldness at a dose of 1mg a day, which is relatively less in comparison to the dose used in the treatment of benign prostatic hyperplasia. Finasteride has been clinically proven to produce effective results by halting the progression of hair loss and encouraging new hair growth. Finasteride is marketed as Proscar 5 mg tablets for Benign prostatic hyperplasia and as Propecia 1 mg for the treatment of male pattern baldness, although you could find generic equivalents with your chemist or online pharmacy.
Now coming back to the key discussion on our blog
“Can I take Finasteride along with other hair loss treatment?”

Finasteride does not work straight away and positive results are seen after using the treatment for at least three to six months. Most men notice significant results by the time they’ve used the treatment for a year. This has prompted many physicians/dermatologists to try other treatment options where Finasteride is combined with either Minoxidil or Aminexil to yield better results and it’s true to say they have succeeded in seeing positive results in quick time.
As a Pharmacist, I would say that this option of combining two different medications from a different class altogether which work via different mechanisms would result in a better treatment response than just increasing the dose of one medication. This is indeed true when we talk about the combination of Finasteride (1mg tablet) with Minoxidil (5% solution) or Finasteride (1mg tablet) with Aminexil (1.5 % solution).

Minoxidil is a blood pressure lowering medication prescribed to be taken orally for patients presenting with high blood pressure. But dermatologists have observed that Minoxidil promotes hair growth on certain parts of the body. Further studies have proven that the medication could induce hair growth in certain people when it is given topically.
As a hair loss treatment, Minoxidil works by extending the growth phase of the hair follicles. The drug is said to cause vasodilation (increased blood flow) in the areas of the scalp and thereby stimulate the growth of hair follicles. Minoxidil comes in two concentrations as a 2% solution intended for use in women and a higher concentration of 5% intended for use in men.
Most of the prescriptions that I’ve got to dispense for the treatment of androgenic alopecia would contain a combination of oral Finasteride 1mg along with a 5% solution of Minoxidil. There are many clinical pieces of evidence that men using Finasteride for hair loss who add Minoxidil to their treatment plan have a slightly better result than men who only use Finasteride.
From observing patients treated with a combination of these medications one could conclude that there are many benefits of Combining Minoxidil and Finasteride. Both the drugs have a different mechanism of action yet act synergistically (compliment each other) in treating androgenic alopecia or male pattern baldness. Finasteride and Minoxidil are approved by both MHRA and USFDA.

Aminexil is a well-known hair loss treatment marketed for use in both men and women. But unlike Finasteride or Minoxidil, Aminexil is yet to be officially approved by the regulatory authorities. There are many familiar brands such as Vichy and L’Oreal who market preparations containing Aminexil as a1.5% solution for the treatment of hair loss.
With reference to the mechanism of action, Aminexil is structurally related to Minoxidil and therefore one could draw evidence that it works similar to Minoxidil, although there are not many research articles related to it. Available research data indicate that Aminexil inhibits an enzyme that is implicated in inducing fibrosis of the connective tissue beneath the hair follicles. The enzyme in question is presumed to cause the androgen reactive hair follicles to shrink which is a root cause of male pattern baldness.
During my days as a community pharmacist, I’ve had the opportunity to work with a US-educated dermatologist of Lebanese origin, who commonly prescribed a combination of Finasteride 1mg with the 1.5% solution of Aminexil. Indeed many of her patients were extremely satisfied with the outcome of this combination.

Combinations involving either Finasteride with Minoxidil or Finasteride with Aminexil can be certainly considered for the effective treatment of male pattern baldness. In fact, these combinations are known to yield better results in comparison to Finasteride used alone. No major drug interactions or significant side effects have been reported with the use of these combinations.
You could have yourself consult with a dermatologist or seek advice from a registered pharmacist before you begin treatment. You could purchase your medication from your neighbouring chemist or have them sent to you through our online pharmacy.