Levitra contains a phosphodiesterase type 5 inhibitor used in the treatment of erectile dysfunction in men mostly middle-aged. The active ingredient of Levitra, Vardenafil was identified in 1994. Vardenafil was named Levitra by three manufacturers Bayer Pharmaceuticals, GlaxoSmithKline, and Schering-Plough.

The application for the marketing authorization was submitted to the European Agency of Medicines (EMA) in 2001.

In March 2003, Levitra received the marketing authorization from the European Commission and also from regulatory authorities in several Latin America countries. A few months later, in the same year, Levitra was approved by the US Food and Drug Administration (FDA).

Starting with 2005, Bayer received the rights to brand Levitra.

The mechanism of penile erection

The penis physiological states of flaccidity or erection result from the contraction or relaxation, respectively, of smooth muscle cells in the corpus cavernosum.

Penile erection is a spinal reflex that is initiated by autonomic and somatic penile afferents and also by supraspinal influences from visual, olfactory, and imaginary stimuli. There are several central transmitters involved in the erectile control, some of them with a facilitatory role and others with an inhibitory role.

The central transmitters with a facilitatory role in the penile erection are:

The central transmitters that inhibit the penile erection are serotonin which may be either facilitatory or inhibitory, and enkephalins which are inhibitory.

How does Levitra work in the treatment of erectile dysfunction?

Like other phosphodiesterase type 5 inhibitors, Levitra is not effective in the absence of sexual stimulation. Levitra acts by increasing the blood flow in the penis and improves the erectile function in men with erectile dysfunction.

Levitra is a fast acting medicine to treat erectile dysfunction.

In Levitra film-coated tablets, the active ingredient Vardenafil is rapidly absorbed. The maximum observed plasma concentrations were reached in some men as early as 15 minutes after oral administration. However, 90% of the time, maximum plasma concentrations are reached within 30 to 120 minutes (median 60 minutes) of oral dosing in the fasted state.

The rate of absorption of vardenafil film-coated tablets is reduced by high-fat meals (containing 57% fat).

After oral administration of Levitra orodispersible tablets without water, vardenafil is rapidly absorbed. The median time to reach the maximum plasma concentration varied between 45 to 90 minutes and was similar or slightly delayed (by 8 to 45 min) compared to the film-coated tablets.

The mean volume of distribution for Vardenafil is 208 l, indicating distribution into tissues. Vardenafil and its major circulating metabolite (M1) are highly bound to plasma proteins (approximately 95% for vardenafil or M1).

Levitra film-coated tablets are metabolised predominantly by hepatic metabolism via cytochrome P450 (CYP) isoform 3A4 with some contribution from CYP3A5 and CYP2C isoforms.

In humans, the one major circulating metabolite (M1) results from desethylation of vardenafil and is subject to further metabolism with a plasma elimination half-life of approximately 4 hours. Parts of M1 are in the form of the glucuronide in the systemic circulation. Metabolite M1 shows a phosphodiesterase selectivity profile similar to vardenafil and an in vitro potency for phosphodiesterase type 5 of approximately 28% compared to vardenafil, resulting in an efficacy contribution of about 7%. 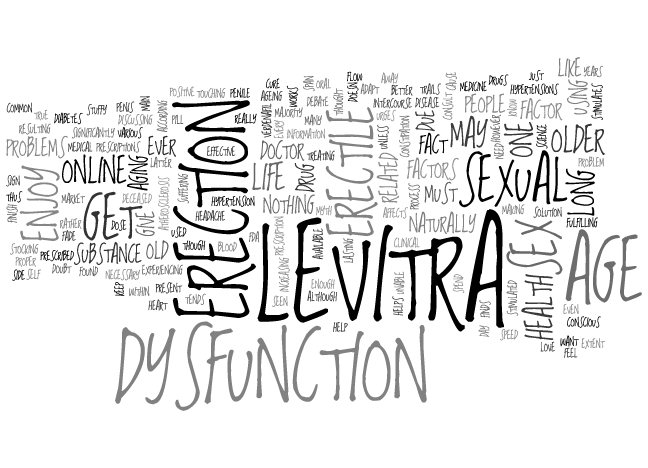 What are the side effects of Levitra?

Like all other drugs, Levitra can cause side effects, although not everybody gets them. Most of the effects are mild or moderate.

Very common side effects (may affect more 1 in 10 patients) include:

Common side effects (may affect up to 1 in 10 patients) include:

Uncommon side effects (may affect up to 1 in 100 patients) include:

Rare side effects (may affect up to 1 in 1000 patients) include:

Very rare or unknown side effects (may affect less than 1 in 10000 patients) include:

Stop taking Levitra and contact your doctor immediately if you experience a partial, sudden, temporary or permanent decrease or loss of vision in one or both eyes.

Facts that you should take into consideration before taking Levitra

Before taking Levitra, tell you should tell your doctor or your pharmacist if you suffer or ever suffered from:

Levitra is just one of a number of medications used in the treatment of erectile dysfunction – Most of them can be bought here at Assured Pharmacy (if you need any peace of mind using an online pharmacy). These include Viagra (Sildenafil), Levitra (Vardenafil), Cialis (Tadalafil). Viagra Connect has also recently been released in the U.K. All of which have similar, but noticeably different effects and side-effects which are noted and discussed here.

The following changes may be helpful for patients with erectile dysfunction:

Be weary of what natural remedies you come across online, Kamagra, for example, is marketed as a cure for erectile dysfunction but is illegal and unregulated in the U.K.

L-arginine is an amino acid which occurs naturally in food, boosts the body’s production of nitric oxide, a compound that facilitates erections by dilating blood vessels in the penis.

Several studies have shown the effectiveness of L-arginine against erectile dysfunction. A trial published in 1999 found that high doses of L-arginine can help improve sexual function, but only in men with abnormal nitric oxide metabolism, such as that associated with cardiovascular disease.

In another study, published in 2003 the researchers showed that patients diagnosed with erectile dysfunction who took L-arginine along with the pine extract pycnogenol saw major improvements in sexual function with no side effects.

Ginseng is the most common ingredient among top-selling supplements for men’s sexual health.

Red ginseng has been reported to improve erectile function in a rat model of metabolic syndrome and it was also found to inhibit fibrosis of the corpus cavernosum of the penis.

Yohimbine is an indole alkaloid derived from the bark of the African Yohimbe tree. The mechanism of action consists of inhibition of inhibition of central alpha-2-adrenergic receptors, decreasing central inhibition of arousal, and increasing penile nerve stimulation resulting in increased level of nitric oxide. Seven placebo-controlled studies have been shown that yohimbine is superior to placebo for the treatment of erectile dysfunction with rare adverse events.

Ginkgo Biloba is known to improve memory enhancement in geriatric population and also to improve claudication distance and cutaneous ulcers in patients with the peripheral vascular disease.

The adverse effects of Ginkgo Biloba include headaches, major bleeding (in a patient who is taking warfarin concurrently) and seizures with reported fatalities.

In some patients, the low endogenous nitric oxide formation and the increased oxidative stress can inactivate the nitric oxide and inhibit the activity of guanylate cyclase. For this reason, in these patients, the effectiveness of phosphodiesterase type 5 inhibitors is significantly reduced.

A study using an in vivo model using human corpus cavernosa tissue from 16 patients who did not respond to phosphodiesterase type 5 inhibitors found that combination of soluble guanylate cyclase stimulator and vardenafil enhanced relaxation of the corpus cavernosa.

Therapy with stem cells represents an alternative for reducing the transitory effect of phosphodiesterase type 5 inhibitors. Stem cell regenerative therapy is based on the rationale that stem cells can differentiate into a wide variety of cells including endothelial cells, Schwann cells, smooth muscle cells, and neurons.

The efficacy of stem cells in erectile dysfunction treatment has been studied in several animal models and also in human subjects. One study included 7 diabetic men aged between 57 and 87 who were treated with an intracavernosal injection of 15 million allogeneic umbilical cord blood stem cells. Morning erection was regained in six out of the seven men at 6 months from time of injection. No adverse events were reported.

In another study, bone marrow-mononuclear cells have been shown to be effective in erectile dysfunction treatment. The study included 12 patients who received escalating doses of bone marrow mononuclear cells. After 6 months, there were reported significant improvements of intercourse satisfaction and erectile function.

Gene-based therapy has been proposed as a potential new therapy for patients with erectile dysfunction who do not respond to phosphodiesterase type 5 inhibitors. Since the nitric oxide principally contributes to the relaxation of the cavernous smooth muscle, genes involved in nitric oxide synthesis such as nitric oxide synthase (NOS), protein inhibitor of NOS (PIN), anti-arginase, cGMP-dependent protein kinase G1 have been tested for potential gene therapies of erectile dysfunction. Gene therapy has the role to enhance production or nitric oxide-mediated signalling pathways, growth factor-mediated nerve regeneration or K+ channel activity in the smooth muscle.

An important advantage of gene therapy is the fact that the genetic material can be easily injected into the penis, avoiding potential systemic complications. Furthermore, the effects of gene therapy are more prolonged in the penis because of a slow turnover rate of the tunica albuginea (tough fibrous layer of connective tissue that surrounds the corpus cavernosa of the penis).

Low-intensity extracorporeal shockwave therapy (Li-ESWT) represents a novel and promising treatment modality for erectile dysfunction. It is a non-invasive therapy and uses acoustic waves, which can pass through tissue and be focussed to target specific areas or organs to induce the desired effects. The mechanism of action for this therapy consists of sending acoustic waves that generate pressure impulses, which can treat patients with kidney stones, tendinitis, and peripheral vascular disease.  The mechanisms by which this therapy enhances erectile function are unclear, but hypotheses include stimulation of neoangiogenesis, recruitment of stem cells and Schwann cell activation leading to nerve regeneration.

Li‑ESWT has been suggested to improve the effect of phosphodiesterase type 5 inhibitors in men who have previously not responded to this treatment.

The major advantage of Li‑ESWT therapy is the possibility to restore natural erections.