Orlistat is an oral capsule that is classed as either a Pharmacy (P) medicine or a Prescription Only Medicine (POM) depending on the strength of the capsules. The P medicine legal category means that medicines in this category can only be bought over the counter from registered pharmacy premises. The POM category means medicines in this category can only be supplied under the instructions of a duly qualified and registered doctor or non-medical prescriber.
Orlistat is available as a P Medicine from the following manufacturers:

Orlistat is available as a POM from the following manufacturers:

As a lipase inhibitor that reduces the absorption of dietary fat, Orlistat is used as an aid in weight loss and/or to help reduce the risk of weight that has been lost in return. Orlistat can do this as it prevents the absorption of fat in food eaten. It is an adjunct in obesity (in conjunction with a mildly hypocaloric diet in individuals with a body mass index (BMI) of 30 kg/m2 or more or in individuals with a BMI of 28 kg/m2 or more in the presence of other risk factors such as type 2 diabetes, hypertension, or hypercholesterolaemia).
The adult oral dose for Orlistat is 120 mg up to 3 times a day, taken immediately before, during, or up to 1 hour after each main meal that contains fat. If a meal is missed or contains no fat, the dose of Orlistat should be omitted.
Orlistat is contra-indicated in patients that have been diagnosed with Cholestasis and/or chronic malabsorption syndrome. 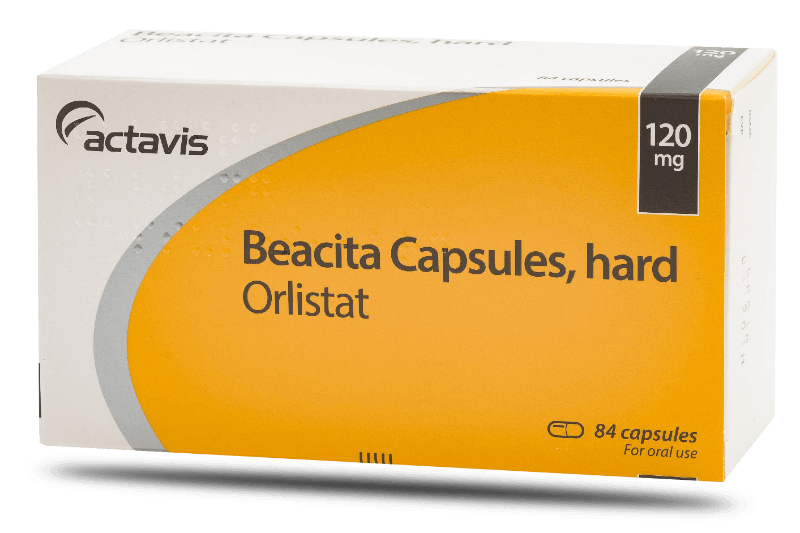 Orlistat belongs to the pharmacotherapeutic group: Peripherally acting anti-obesity preparations.
Orlistat is a potent, specific and long-acting inhibitor of gastrointestinal lipases. It exerts its therapeutic activity in the lumen of the stomach and small intestine by forming a covalent bond with the active serine site of the gastric and pancreatic lipases. The inactivated enzyme is thus unavailable to hydrolyse dietary fat, in the form of triglycerides, into absorbable free fatty acids and monoglycerides. From clinical studies, it has been estimated that orlistat 60 mg taken three times daily blocks the absorption of approximately 25% of dietary fat. The effect of orlistat results in an increase in faecal fat as early as 24 to 48 hours after dosing. Upon discontinuation of therapy, faecal fat content returns to pre-treatment levels, usually within 48 to 72 hours.

Studies in normal weight and obese volunteers have shown that the extent of absorption of orlistat was minimal. Plasma concentrations of intact orlistat were non-measurable (< 5 ng/ml) eight hours following oral administration of orlistat.
In general, at therapeutic doses, detection of intact orlistat in plasma was sporadic and concentrations were extremely low (< 10 ng/ml or 0.02 µmol), with no evidence of accumulation, which is consistent with minimal absorption.

The volume of distribution cannot be determined because the drug is minimally absorbed and has no defined systemic pharmacokinetics. In vitro orlistat is > 99 % bound to plasma proteins (lipoproteins and albumin were the major binding proteins). Orlistat minimally partitions into erythrocytes.

Based on animal data, it is likely that the metabolism of orlistat occurs mainly within the gastrointestinal wall. Based on a study in obese patients, of the minimal fraction of the dose that was absorbed systemically, two major metabolites, M1 (4-member lactone ring hydrolysed) and M3 (M1 with N-formyl leucine moiety cleaved), accounted for approximately 42 % of the total plasma concentration.
M1 and M3 have an open beta-lactone ring and extremely weak lipase inhibitory activity (1000 and 2500 fold less than orlistat respectively). In view of this low inhibitory activity and the low plasma levels at therapeutic doses (average of 26 ng/ml and 108 ng/ml respectively), these metabolites are considered to be pharmacologically inconsequential.

Studies in normal weight and obese subjects have shown that faecal excretion of the unabsorbed drug was the major route of elimination. Approximately 97 % of the administered dose was excreted in faeces and 83 % of that as unchanged orlistat.
The cumulative renal excretion of total orlistat-related materials was < 2 % of the given dose. The time to reach complete excretion (faecal plus urinary) was 3 to 5 days. The disposition of orlistat appeared to be similar between normal weight and obese volunteers. Orlistat, M1 and M3 are all subject to biliary excretion.

How long does it take before you start seeing results with Orlistat?

As Orlistat belongs to two legal categories (P Medicines and POMs), the results from clinical trials for the two most popular brands of Orlistat will be reviewed.
Alli
Two double-blind, randomised, placebo-controlled studies in adults with a BMI 28 kg/m2 support the efficacy of orlistat 60 mg taken three times daily in conjunction with a hypocaloric, lower fat diet. The primary parameter, change in body weight from baseline (time of randomisation), was assessed for body weight over time (Table 1) and the percentage of subjects who lost 5% or 10% of body weight (Table 2). Although weight loss was assessed during 12 months of treatment in both studies, most weight losses occurred within the first 6 months.

More patients on orlistat or placebo lost baseline body weight of at least 5 % at 12 weeks or 10 % at one year in the XENDOS study than in the five 2-year studies. The reason for this difference is that the five 2-year studies included a 4-week diet and placebo lead-in period during which patients lost on average 2.6 kg prior to commencing treatment.

Data from the 4-year clinical trial also suggested that weight loss achieved with orlistat delayed the development of type 2 diabetes during the study (cumulative diabetes cases incidences: 3.4 % in the orlistat group compared to 5.4 % in the placebo-treated group). The great majority of diabetes cases came from the subgroup of patients with impaired glucose tolerance at baseline, which represented 21 % of the randomised patients. It is not known whether these findings translate into long-term clinical benefits.

In obese type 2 diabetic patients insufficiently controlled by antidiabetic agents, data from four one-year clinical trials showed that the percentage of responders (≥ 10 % of body weight loss) was 11.3 % with orlistat as compared to 4.5 % with placebo. In orlistat-treated patients, the mean difference from placebo in weight loss was 1.83 kg to 3.06 kg and the mean difference from placebo in HbA1c reduction was 0.18 % to 0.55 %. It has not been demonstrated that the effect on HbA1c is independent of weight reduction.

In a multi-centre (US, Canada), parallel-group, double-blind, placebo-controlled study, 539 obese adolescent patients were randomised to receive either 120 mg orlistat (n=357) or placebo (n=182) three times daily as an adjunct to a hypocaloric diet and exercise for 52 weeks. Both populations received multivitamin supplements. The primary endpoint was the change in body mass index (BMI) from baseline to the end of the study.

The results were significantly superior in the orlistat group (difference in BMI of 0.86 kg/m2 in favour of orlistat). 9.5 % of the orlistat-treated patients versus 3.3 % of the placebo-treated patients lost ≥ 10 % of body weight after 1 year with a mean difference of 2.6 kg between the two groups. The difference was driven by the outcome in the group of patients with ≥ 5 % weight loss after 12 weeks of treatment with orlistat representing 19 % of the initial population. The side effects were generally similar to those observed in adults. However, there was an unexplained increase in the incidence of bone fractures (6 % versus 2.8 % in the orlistat and placebo groups, respectively).

Are there any special warnings or precautions when taking Orlistat?

In clinical trials, the decrease in body weight with orlistat treatment was less in type II diabetic patients than in non-diabetic patients. Antidiabetic medicinal product treatment may have to be closely monitored when taking orlistat.

It is not recommended that Orlistat is taken at the same time with Ciclosporin.

Patients should be advised to adhere to the dietary recommendations they are given.

The possibility of experiencing gastrointestinal adverse reactions may increase when orlistat is taken with a diet high in fat (e.g. in a 2000 kcal/day diet, > 30 % of calories from fat equates to > 67 g of fat). The daily intake of fat should be distributed over three main meals. If orlistat is taken with a meal very high in fat, the possibility of gastrointestinal adverse reactions may increase.
Cases of rectal bleeding have been reported with Xenical. Patients are advised to inform their doctor or non-medical prescriber so that they can investigate further in case of severe and/or persistent symptoms.
There is a risk of failure of oral contraception, especially if there is a severe case of diarrhoea. Thus, patients are advised to use an additional contraceptive method.

Coagulation parameters should be monitored in patients treated with concomitant oral anticoagulants.
The use of orlistat may be associated with hyperoxaluria and oxalate nephropathy leading sometimes to renal failure. This risk is increased in patients with underlying chronic kidney disease and/or volume depletion.
Rare occurrences of hypothyroidism and/or reduced control of hypothyroidism may occur. The mechanism, although not proven, may involve a decreased absorption of iodine salts and/or levothyroxine.
Antiepileptics patient: Orlistat may unbalance anticonvulsant treatment by decreasing the absorption of antiepileptic drugs, leading to convulsions.
Antiretrovirals for HIV: Orlistat may potentially reduce the absorption of antiretroviral medicines for HIV and could negatively affect the efficacy of antiretroviral medications for HIV.

You should not take Orlistat if you are allergic or hypersensitive to it or any of the other ingredients in each capsule (excipients).

Reporting suspected adverse reactions after authorisation of the medicinal product is important as it allows for continued monitoring of the benefit/risk balance of the medicinal product. Healthcare professionals and members of the public are encouraged to report any suspected adverse reactions via the Yellow Card Scheme.
You can find out more about the Yellow Card Scheme on the Medicines and Healthcare products Regulatory Agency (MHRA) website.