Spedra is the brand name for the medication known as Avanafil and is manufactured by A. Menarini Farmaceutica Internazionale SRL. It belongs to the pharmacotherapeutic group known as Urologicals.
Spedra is available as 50mg, 100mg and 200mg tablets of Avanafil. The tablets can easily be identified because they are pale yellow oval tablets, debossed with “50”, “100” or “200” on one side.
It is indicated for the treatment of erectile dysfunction in adult men. It is only effective with sexual stimulation.
The recommended starting dose is 100 mg, taken as needed and on an empty stomach, approximately 15 to 30 minutes before sexual activity.
Depending on individual efficacy and tolerability, the dose may be increased to a maximum dose of 200 mg or decreased to 50 mg. The maximum recommended dosing frequency is once per day.
If taken with food, the onset of action may be delayed compared to when taken on an empty stomach.

How does Spedra work?

Avanafil is a highly selective and potent, reversible inhibitor of cyclic guanosine monophosphate (cGMP) – specific phosphodiesterase type 5. When sexual stimulation causes the local release of nitric oxide, inhibition of PDE5 by avanafil produces increased levels of cGMP in the corpus cavernosum of the penis. This results in smooth muscle relaxation and inflow of blood into the penile tissues. This consequently produces an erection. 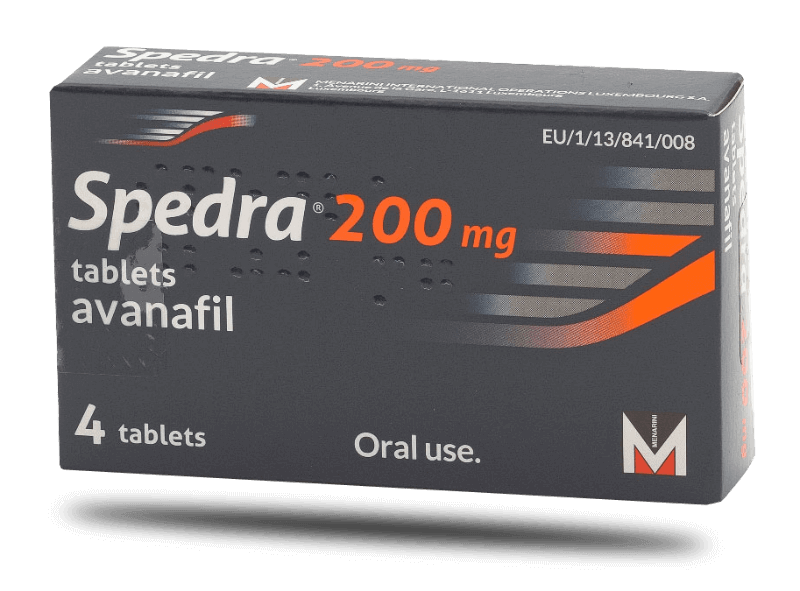 Avanafil is not effective in the absence of sexual stimulation. Sexual stimulation can be by direct physical contact and/or sexual thoughts.
In vitro studies have shown that avanafil is highly selective for PDE5. Its effect is more potent on PDE5 than on other known phosphodiesterases. Avanafil is > 100-fold more potent for PDE5 than PDE6, which is found in the retina and is responsible for phototransduction.
Avanafil is roughly 20,000 more selective for PDE5 than PDE3. This is of significance because PDE3 is involved in the control of cardiac contractility.
In a penile plethysmography (RigiScan) study, Avanafil 200 mg produced erections considered enough for penetration (60% rigidity by RigiScan) in some men as early as 20 minutes after dosing and overall response of these subjects to avanafil was statistically significant, compared to placebo, in the 20 – 40-minute time interval.

How long does Spedra last?

The best way to prove the effectiveness of any medication is through clinical trials. To assess the effectiveness of any medications, the results of all clinical trials need to be evaluated.
In clinical trials, Avanafil was assessed for its effect on the ability of men with erectile dysfunction (ED) to achieve and maintain an erection sufficient enough for satisfactory sexual activity. Avanafil was evaluated in 4 randomized, double-blind, placebo-controlled, parallel group trials of up to 3 months in duration in the general population with ED, in patients with Type 1 or Type 2 diabetes and ED, and in patients with ED following bilateral nerve-sparing radical prostatectomy. The fourth study investigated the onset of action of avanafil at two doses (100 and 200 mg) in terms of a per-subject proportion of sexual attempts resulting in the satisfactory completion of sexual intercourse.
A total of 1774 patients received avanafil, which was taken as needed at doses of 50 mg (one study), 100 mg and 200 mg (four studies), respectively. The patients were instructed to take 1 dose of study medicinal product approximately 30 minutes prior to initiation of sexual activity.
In the fourth study, patients were encouraged to attempt sexual intercourse approximately 15 minutes after taking their dose, to assess the onset of the erectogenic effect of Avanafil, taken on an as-needed basis, at the 100 and 200 mg dose.
In addition, a subset of patients was enrolled in an open-label extension trial with 493 patients receiving Avanafil for at least 6 months and 153 patients for at least 12 months. Patients were initially assigned to Avanafil 100 mg and at any point during the trial, they could request to have their dose of avanafil increased to 200 mg or decreased to 50 mg based on their individual response to treatment.